Slice of Life - Coincidence or Message?

Do you believe coincidence?

Do you believe that everything happens for a reason?

Or do you fall somewhere in the middle?

Last week I received an email from my sister-in-law, Angie.  She was telling a story about what she thought was a typical flight back home for her job.  Here is part of her email:

I was traveling this week and spent a lot of time on planes.   I don't like to "chat" on planes and usually find a way to not have to engage.  It is a busy time and I was hopeful that I could make good use of my time flying and get some much needed work done.  All was good on my flight there…nobody in the seat next to me and plenty of room to work on my laptop.

On the way back…100% full flight…ugh!  Too crunched to work on my laptop, so I thought I would put in my ear buds and watch a movie.  As my seat mate squeezed into the middle seat, we shared a few pleasantries.  The flight got under way and I watched a mindless movie.  When she needed to get up to go to the restroom I unhooked my buds.  Upon her return she asked "Would you like to see what I do for a living?"  I said "sure."  She pulls out her iPad and I immediately think she is a photographer, but quickly realize she is an artist.

How do you think I looked when she showed me this?  Needless to say, we chatted the remainder of the flight.

The artist is Ramona Swift, and her artwork is magnificent.  (Many of her pieces remind me of pictures I would find on Elsie's blog!)

Now, let me get to the "rest of the story" and explain why this is so significant.

Several years ago my in-laws passed away within a year and eight months of each other.  My father-in-law passed first, followed by my mother-in-law.

The day before Marge passed away, all seven of her children were at the hospital.  Two of the girls were in the room with Marge and the rest were in the family lounge.  The two sisters came out of the room and told a story about something strange that had just happened while they were in with their mom.

They said a butterfly came up to the window and kept hovering like it was looking in.  It stayed at the window for quite some time.  They were fascinated that a butterfly would be up that high, the sixth floor of the hospital, and that it remained there for so long.

One of them said, "If it was anything but a butterfly, I would think it was Dad coming to get Mom.  But he wouldn't come back as a butterfly."

Frank, my father-in-law got to a point before he died where he needed a cane to walk.  He used a cane that belonged to my husband's grandmother.  Guess what it had on it?  Yes, butterflies.  My sister-in-law, Linda, tried to talk him into getting a more "masculine" cane but he said no, the purple cane with butterflies suited him just fine.

After Marge passed, the family went through some very stressful, difficult times.  Try to imagine seven siblings trying to make decisions.  Linda who was the one handling many of the details, lives in Kentucky.  She and my husband had many of the affairs in order, and she was getting close to returning home.  Before she went, she made one last trip to the cemetery.

Guess what was there on the flowers covering the fresh grave?  Yes, a beautiful butterfly, giving her a sign, a message that said you can go home now, everything will be OK. 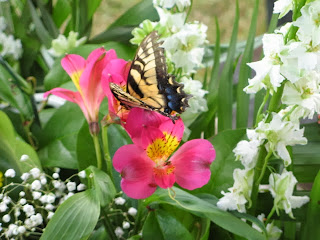 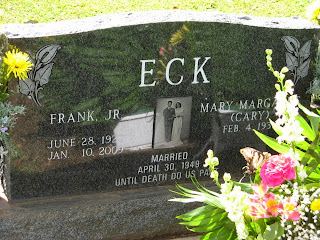 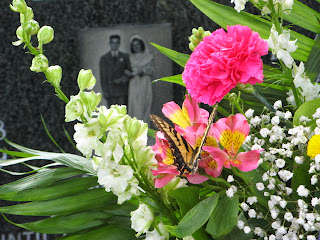 Was it a coincidence that a butterfly was hovering at Marge's window, beckoning her to let go and come home?  Or was it a message?

Was it a coincidence that a butterfly was on the flowers in the cemetery, giving Linda a sense of peace?  Or was it a message?

Was it a coincidence that almost three years to the day of Marge's death, Angie finds herself on a plane with this artist whose beautiful artwork is a meadow of butterflies?  Or was it a message?

Was it a coincidence that the artist wasn't even supposed to be on this flight, but the original flight was overbooked and she was bumped to this one?  Or was it a message?

Coincidence or message?  I'll leave that for you to decide....I already have my answer.

Email ThisBlogThis!Share to TwitterShare to FacebookShare to Pinterest
Labels: slice of life