Barbara Dee has a gift for taking tough topics and writing about them on a middle grade level. She doesn't "water them down." She relates. And her new book, Maybe He Just Likes You, is no different.

Mila is a 7th grader who becomes a victim of sexual harassment. It begins with an awkward hug from a boy and moves to other boys grabbing her butt, brushing against her arm or her leg, and making comments about the way her clothes fit her developing body and laughing. The boys even make a game of out. Her friends blow it off, saying it is just flirting that she is overreacting. Mila feels that no one takes her seriously, and she has nowhere to turn.

I became frustrated with the teachers in the beginning of the book. I couldn't understand why the adults in Mila's life didn't see what was going on and when Mila tried to talk about it, they appeared to ignore it. 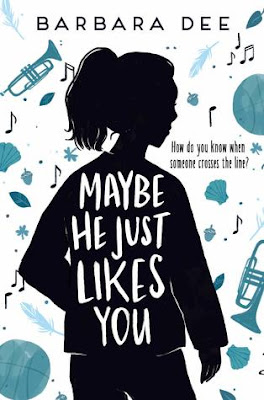 Middle school kids are dealing with so much. Hormones, puberty, and rapid growth and how these affect their social, emotional, and psychological health. Their relationships with their friends become more important than the relationships with their parents. One day they want to talk about their problems, and the next day, I can't get them to talk. Social media adds another complicated layer.

The behavior of the adults in the book hit me hard. When I mentioned this on Twitter, Barbara tweeted back, "The adults are well-meaningthey just don't see."

By the end of the book, I realized this was true.  middle school kids is tricky, but I don't recall a student ever coming to me about such as those that Mila experienced.

Or have I just not noticed? Have I missed the signs? Has there been a time when a student has been afraid to talk to me when they have been a victim of sexual harassment? Do they even know what sexual harassment means?

Or have I unintentionally been a well-meaning adult?

This is such an important book for middle school students AND middle school teachers.  For many, this will be a book about consent and crossing the line. For me, this book was about making sure I am NOT just a well-meaning adult.

This is a book you will want on your shelves when it comes out in October.