Each week Ruth Ayres extends an invitation to share our celebrations. 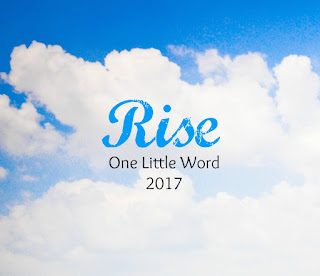 When I chose RISE as my one little word for 2017 and marked January as the month to embrace challenges, I had no idea the early impact they would have on my life.

Two days after I announced it the world, I received a phone call from my sister.

She didn't know much about the lab report other than those words.

So the wait began.

I went with her to the appointment where she received some optimistic news.  The initial lab report looked like it was stage 0.  (I didn't even know there was a stage 0.) She scheduled her surgery for the following week.

And we waited again.

The surgery went well (even after she and her doctor got the flu that weekend) and she received the lab report this week.  It was a very small tumor and all of the margins were clear, which means the tissue surrounding the tumor were clear of cancer cells.

The news we were hoping for.  Now, she has several weeks of radiation and again, some more waiting.  But for now, we will celebrate!

Thank you all for your thoughts and prayers...even when you didn't know exactly what you were praying for.  You knew something was going on, and your kind words were much appreciated.

I don't want this to sound like a PSA, but if you, or someone you know, do not get regular mammograms, please make an appointment soon.  I know my sister's cancer was caught through early detection which played an important part in her story.

Have a great week and may you find many celebrations along the way!