Last week I read the book Each Kindness by Jackie Woodson to my 6th graders. Although we were doing character ananlysis, I love this book for its simple message. 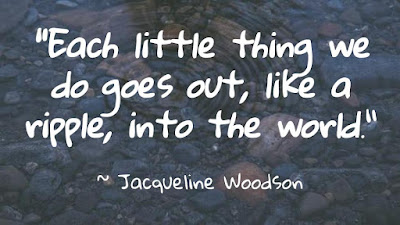 Ripple is my one little word for this year becuase I truly believe that what we do makes an impact in some way, big or small.

Sunday, I was in the drive-thru of our McDonald's before I went to school to prepare for this week, and I saw my colleague behind me. As I approached the window, I told the employee, who happened to be a former student, that I wanted to pay for Mr. Connor's meal. My student looked up the amount, and I paid it and pulled forward.

As Mr. Connor approached the window, I saw that he handed the employee his card. I thought, "Hmm...what is going on? He shouldn't be paying."

Little did I know that when Mr. Connor was in line, the car behind him turned his music up really loud - the kind of loud where you can literally "feel" the beat. Mr. Connor stuck his head out the window and looked at the guy. Surprisingly, the young man turned it down. Mr. Connor thought, "I should buy that guy's meal since he respectfully turned down his music when I looked at him."

That's when the ripple began. When Mr. Connor got up to the window and found out that his meal was paid for, he then made the decision to pay for the meal of the young man behind him. As Mr. Connor moved up, he watched the car to see his expression, and guess what? That young man handed the employee some money.

The
ripple
continued...
Posted by Leigh Anne Eck at 7:40 AM

Email ThisBlogThis!Share to TwitterShare to FacebookShare to Pinterest
Labels: #TeachWritetober19